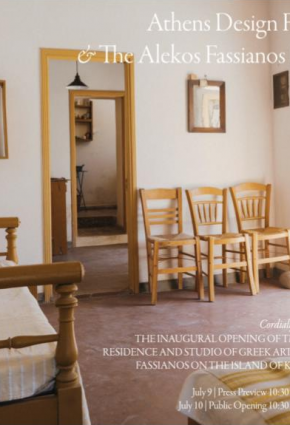 Alekos Fassianos Estate invites you to:
AN INAUGURAL OPENING OF THE FORMER RESIDENCE AND STUDIO OF GREEK ARTIST ALEKOS FASSIANOS ISLAND OF KEA, GREECE

…He found himself in Kea within the spring of 1967. A place still virginal, filled with history. With immediacy, he fell in love with the island’s Chora, ‘Ioulida’, for its picturesque and historical site. The locals embraced him and a friendship began amongst them after discussions on the commonplace, their habits, and their work – It was one of the few Cycladic islands with fertile stretches of land, livestock, and tanneries… even an enamel factory! It was self-sufficient. He liked that.

He bought a small house typical of Cycladic architecture – with rich curves dressed in white asbestos, a traditional roof, and with a vista of the Aegean from the small windows.

He would go there in the summers, upon his return from the rain-drenched Paris, so he may enjoy the Cycladic sun, which he loved…He would go there to paint, to cook the fish (of those he caught), to be a host to his friends and admirers who wanted to view him in the act of creation…at times painted works, at times functional objects, toys, sculptures, and anything else with the simplest of materials. He was continuously enthused by something within his ‘nest’; in this homely place, where, when tired and in need of a rest, he would lie down on the lithe, small bed with woven linens. He was humble, simple – in the same way as his spaces. Everything at once…from the furniture to the curtain rod…of his hand. His identity revealing itself everywhere. The grandeur of his creativity – the majesty – that leaves his personal mark to eternity. Translated from Greek, Original text by Mariza Fassianou

In collaboration with Athens Design Forum

Wallpaper: Alekos Fassianos retrospective in Athens is first showcase of the painter’s design