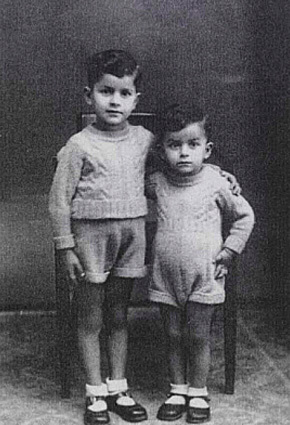 Alekos Fassianos was born in Athens on October 25, 1935 next to the Church of the Holy Apostles – his grandfather the parish priest, lived there with his entire family. His father was a composer and music teacher and his mother taught ancient Greek.

His grandfather’s influence was decisive in his upbringing, and he himself mentions it at every possible opportunity.

His mother had a passion for ancient Greek civilization, so she often took her children to archaeological sites where Fassianos had the chance to admire ancient beauty.

By the age of 17 he was painting on his own in search of answers to his own unresolved pictorial queries.

He witnessed the German occupation in all its horror: starvation everywhere, civilian executions in profusion. His uncle was executed by the Germans for writing messages of resistance on the walls of Athens.

In 1945 at the onset of the Greek Civil War he began to paint. His first lessons were conducted in makeshift classrooms such as churches because schools were occupied by German soldiers.

He entered the National Conservatory of Athens where he studied violin for twelve years. There he met musicians such as Yiannis Markopoulos, Mikis Theodorakis and Dora Bakopoulos, who would play an important role in his life.

In high school his companions were students who shared his interest in art, writing and theater, such as filmmaker Theodoros Angelopoulos and poet Lefteris Papadopoulos. Throughout these years, he helped his grandfather at the Church of the Holy Apostles who in his turn encouraged Alekos to pursue painting.