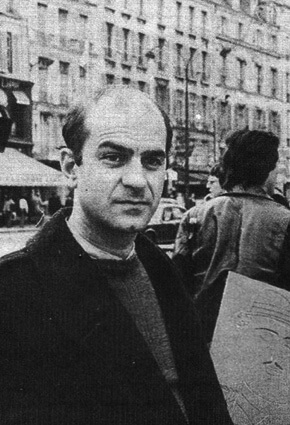 After completing his studies in 1963, he returned to Athens where he reunited with friends active in the Greek art scene.

Along with the architect and painter Antonis Kepetzis, Nikos Stefanou and Vassilis Sperantzas they rented a studio in Kallithea owned by the National Gallery where the group created a lively workshop, the famous Kallithea studio. It was one of the few, if not the only artists’ studio where friends gathered to stage surrealistic happenings and host all-night parties and events. It was the studio that cemented the group of artists at a time of creative effervescence.

Fassianos has characteristically stated: “There we matured as painters full of inspiration and enthusiasm, for a cause that was rooted in reality. At this studio, many friends who were poets, painters, artists and wanderers visited us. Tachtsis, Tsarouchis, Embirikos, Vakalo, Sinopoulos, Karouzos, Analis and many others came around often. So their moral support and advice gave us a lot of courage. When you’re starting out you need the encouragement because you feel some uncertainty about what you’ve created…. With Sperantzas we stayed on the top floor while Stefanou was on the ground floor…. It was there in the house in Kallithea that I drew a smoking cyclist for the first time. Suddenly one day, as I stood at the window and stared at the sky, I was inspired, as if visited by the Holy Spirit, to make a cyclist with a cigar and smoke and his hair blowing in the wind.

When I painted the bicyclists, the room filled up with smoke.

Then I made another, blue, and then a red one. By now I have painted many such riders for bicycle races.”

He began making costumes for Alexis Solomos at the Ancient Theater of Epidaurus, as well as for the National Theater, and the Karolos Koun Theater, etc. He met the American poet Gregory Corso and the French writer Michel Déon. With the encouragement of Andreas Embirikos, he created a series of “cyclists with windblown hair”. His first solo exhibition was inaugurated in 1966 at the Merlin Gallery in Athens. He associated with renowned poets and writers of the time and began the illustration of Elias Petropoulos groundbreaking book dedicated to the music of people living on the margins of society entitled Songs of the Greek Underworld: The Rebetika Tradition (1965).